Celebrate the Past and Move On

On my final non-patriotic post last year, I said farewell to one of my four publishers. Secret Cravings and Sweet Cravings closed last year – a real shame. Sandy treated her authors well, the contract was fair, and many new authors received a first chance to publish. The closing was a class act. Sandy, unlike some publishers I could name, kept the authors in the loop and made every effort to keep the finances fair. While the SCP site has closed, the authors stay close through Facebook, but it’s still time to move on.

Every author remembers receiving that first offer to publish. Fourteen contracts later, I will always be grateful to Judy Gill, at the time the acquisitions editor for Champagne Book Group, for that first vote of confidence in what became Into the Lyons’ Den, the first book in the shapeshifter Lyons’ Tales trilogy. Again, though, it’s time to move on.

Fontaines always married Westburys, until the Twelfth Night Queen rebelled. Amelia Fontaine had been betrothed to her cousin, Percy Westbury, while she was still in leading strings. When Percy and his family arrive for a long holiday visit, Amelia is dismayed by the prospect of the impending arranged marriage. With his estate in shambles, Percy flaunts his plans to use Fontaine Hall’s wealth to benefit his family’s fortunes. When Percy demands that Amelia end her friendship with her neighbor, Edward Thornton, will she choose to follow tradition or pursue happiness?

Edward Thornton, the Earl of Bridgewater, couldn’t remember a time he didn’t love Amelia. He didn’t believe her grandmother would insist on an arranged marriage, until the entire Westbury clan invites themselves to Fontaine Hall. When Edward discovers Percy’s secret life and his sinister plans for Amelia, he embarks on a campaign to rescue her. Will the Twelfth Night Queen help him save Amelia from her cruel fate?

This week M. S. Spencer returns for another visit. She writes romantic suspense and is published by Secret Cravings. Since her last visit, she has some huge, totally cool, changes to share. 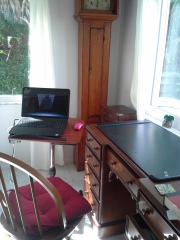 Since I last visited the Author’s Desk, my desk, study, view and venue have radically changed. I now live on the Gulf Coast of Florida in a small bungalow within steps of the beach. My study is part of the lanai and is all windows, with a view of a mangrove swamp on one side and my patio and fountain on the other. In the distance I can see the changing sky over the gulf. I work all morning, then head to the beach around noon. It is, indeed, idyllic. I have managed to write three novels since I moved here 18 months ago—the first in the midst of major renovation. I wrote my new release, Whirlwind Romance, in relative quiet. My current work-in-progress, the Penhallow Train Incident, is set in Maine, where I spent the month of July with my daughter and her main squeeze.  I find it hard to write about a setting I’m not in—do other writers feel that way? 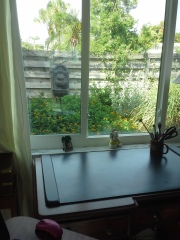 Whirlwind Romance, which released September 2, is a romantic suspense full-length novel (M/F, 3 flames).  I’ve started a funny, sweet murder mystery set in Maine, tentatively entitled The Penhallow Train Incident.  Rachel Tinker, director of the Penhallow Historical Society, meets her match in Griffin Tate, a curmudgeonly retired professor. Together they wade through a on scene awash in red herrings to solve not one, but two murders. If, in fact, they are murders. Along the way they deal with ancient rumors, ancient crime, and ancient tragedy, as they grope nearer and nearer to love in the small coastal town of Penhallow, Maine.

Expect Solomon and the Queen of Sheba, lost tombs, and lost mummies!

About Whirlwind Romance: I didn’t mean to write this story. I meant to write a nice romantic interlude set on Longboat Key, a lovely barrier island on the Gulf Coast of Florida. Even before I’d reached Chapter Two, however, things had taken a geographical turn and veered off into the western Caribbean. Even now I’m not sure how it happened, but everything started to go awry when Lacey Delahaye, my heroine, finds a bedraggled castaway in her mangrove swamp. Fine. Not a problem. He’s handsome, injured, and clearly has a secret. Could he be a lost tourist? A real estate agent caught up in a Florida land scam? An environmentalist who’s discovered that whales have become man-eaters? No, sir. With his exotic, dark looks (flashing black eyes, shimmering ebony hair, etc.), he hardly seemed the real estate agent type. And he has an accent. Therefore he comes from elsewhere. He eventually confesses to Lacey that…well, I certainly won’t divulge his secret. I will say that he and Lacey find themselves in a remote, tiny, tropical paradise, which would be very romantic, except for the vicious serpent lurking there.

Whirlwind Romance: In the aftermath of a hurricane, Lacey Delahaye finds herself marooned on an island on the Florida coast with a mysterious man. Before he can confess his identity, they are kidnapped and taken to a tiny island in the western Caribbean. In a story laced with adventure and romance, Lacey encounters pirates, power-mad ideologues, and palace intrigue, not to mention the advances of three men, only one of whom she loves.

Filed under An Author's Desk

I recently signed a contract with Secret Cravings to publish my first contemporary military romance, Search & Rescue. Looking forward to edits this month and publication in July.

Secret Cravings is participating in The RT Stay-at-Home Party (April 29th – May 6th). On Saturday, May 4th from 7 – 9 pm, the Secret Cravings authors visit Talking  Two Lips Yahoo Group. Stop by for talk, blurbs and excerpts, books giveaways, and swag. Join the Talking TwoLips Yahoo Group to join the fun (Click the icon above to join.). See you there!

Tomorrow, Return to the Search for Aphrodite’s Island