The Harem at Topkapi was known as the Seraglio. It was the private living area of the sultan and his family. The harem was ruled over by the Valide Sultan – the sultan’s mother who came to the harem as a slave and gained power through bearing a son who would be an heir to the Sultan. The Valide Sultan was very powerful – she could give orders directly to the grand vizier, influence  the sultan, select of his wives and concubines, and influence matters of state. 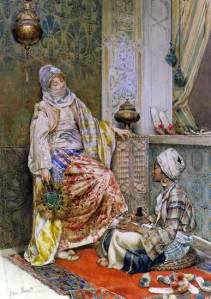 The sultan was allowed by Islamic law to have four legitimate wives, who received the title of kadın (wife). In the 15th century the sultan set the custom of keeping four chosen concubines who were slaves who did not have legal and political difficulties of a legal wife. The women of the Harem had to be foreigners, as Islam forbade enslaving Muslims.

Young girls, called odalisques, were bought as slaves or were received as gifts from nobles and potentates and initially were servants under the harem mistresses. On their arrival, the girls were schooled in Islam and Turkish culture and language, as well as the arts of make-up, dress, comportment, music, reading, writing, embroidery and dancing. Those that were of extraordinary beauty and talent, were seen as potential concubines, and trained accordingly. 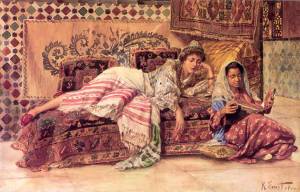 The Valide Sultan was responsible for the maintenance of order and peace inside the harem and decided who was presented to the sultan, her son.  Since no woman was allowed to show herself to the sultan without specific orders, the sultan wore slippers with silver soles so that the clatter of the silver soles warned residents of the sultan’s approach, allowing them to disappear from his sight.