Viking Slavers in the East 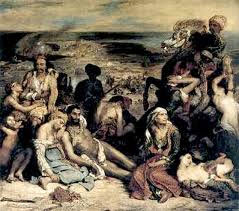 In the 9th and 10th centuries, the Varangians were Scandinavians who migrated eastwards and southwards through what is now Russia and Ukraine.  These traders, pirates and mercenaries followed the river systems and portages of Gardariki to the Caspian Sea and Constantinople. 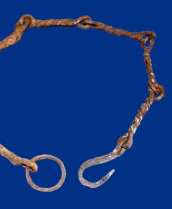 The Varangians who were primarily from Sweden settled along the trading routes and exacted tribute from the Slavs and Fins where they were known as the Rus. They used the Volga River trade route to travel to Greece and the Middle East. 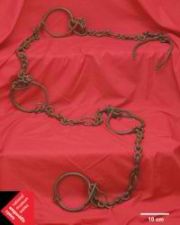 Under the rule of the Rus, the slave trade flourished. The tribes along the river and captives from tribal warfare provided a stead supply of slaves for the southern markets in Constantinople and the Muslim areas. During the eastward expansion of the Germans in the 10th century so many Slavs were captured that their racial name becomes the generic term for a ‘slave.’  The collar which was placed around the slaves’ necks is of Viking origin. The collars were attached to a chain to confine or transport the slaves.  Tomorrow, Slavery in the Middle East.  Rita Bay

Viking Slavers in the West 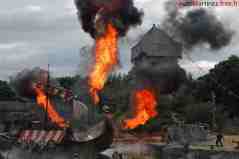 The Viking Age of Scandinavian history began with the Lindisfarne raid on June 8, 793 and ended with the Norman Conquest of England in 1066. The Anglo-Saxon Chronicle describes the as ‘the ravages of heathen men miserably destroyed God’s church on Lindisfarne, with plunder and with slaughter.’ While they carried away plunder, the less able monks were killed and the others were enslaved. Two years later, Vikings raided the monastery on Iona, and other monasteries along the coasts and rivers of northern Europe fell to the Vikings.

Vikings used the Norwegian Sea and Baltic Sea for sea routes to raid and eventually settled in the south. They established the Danelaw, which included Scandinavian York, the administrative centre of the remains of the Kingdom of Northumbria, parts of Mercia, and East Anglia. In Ireland, from the ninth to the twelfth century, Dublin became a major slave trading center. In 870A.D. Vikings besieged and captured Alt Clut in southern Scotland and sold the inhabitants in the Dublin slave markets. The Normans who eventually conquered England and the Viking overlords were descended from Danish and Norwegian Vikings who had invaded northern France and carved out a Duchy.

Not all Viking raids were successful. In 980 AD, the Anglo Saxon Chronicle records that Southampton “was ravaged by a force in ships, the town-dwellers, for the most part, were killed or enslaved.” The fate of captured Vikings was described earlier at an attack on Jarrow (794 AD): “. . . some of the ships were broken up in bad weather and many drowned. Some came alive to shore and were quickly killed at the river’s mouth.’ 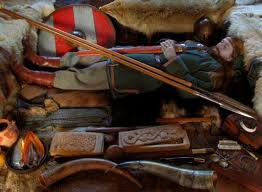 Unlike the losers from yesterday, the Norsemen (called Vikings when they were away on their marauding voyages) who died at home or in battle were buried with rituals that are gruesome by today’s standards. Burials were either in mounds or ships.  The dead, men and women, were buried with their possessions (clothing, weapons, and jewelry) and food for their journey.  Wealthy Norsemen could be buried in ships that were either buried or set on fire.  Sometimes, their dogs, horses, and servants were killed and sent on the voyage with the deceased.   Some Norsemen were buried in ship-shaped graves. 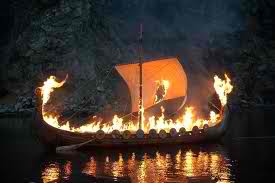 The Vikings believed that those who displayed bravery on the battlefield would receive the greatest reward after death. Odin sent the Valkyries, his female warriors, to the battlefields where they gathered the fallen heroes and them to Asgard to the gods Odin and Freyja were they fought and feasted until Ragnarokk, the twilight of the Gods.  Worthy peasants and thralls (slaves) who died were taken to serve in Thor’s hall, Bilskirnir.  Some fate to look forward to for all eternity, if you were a peasant or thrall.

Berserkers were Norse warriors who fought in a nearly uncontrollable, trance-like fury.  Whether their fighting fury was due to simply working themselves into a rage prior to battle or induced by drugs is debatable.  The berserkers were considered Odin’s special warriors and sometimes wore wolf’s pelt and carried a spear into battle.  They are featured prominently in the sagas and poems from yesterday’s posts where they were portrayed as ravenous men who looted, plundered, and killed across Europe.

The earliest reference to berserkers is in a skaldic poem composed by Thorbiorn Hornklofi in the late 9th century in honor of King Harald Fairhair, as ulfheðnar (men clad in wolf skins). The 12th century Icelandic historian and skald Snorri Sturluson description of berserkers in one of his sagas

“Odin’s men rushed forwards without armor, were as mad as dogs or wolves, bit their shields, and were strong as bears or wild oxen, and killed people at a blow, but neither fire nor iron told upon them.”

Imagine waking up to or being confronted by a horde of marauding Vikings sprinkled with berserkers while going about your daily business.  Going from free to dead or enslaved in a day. Tomorrow, check out a Viking raid gone REALLY bad – for the Vikings.  Rita Bay

Skalds were the poets of the Vikings.  During the 9th and 10th centuries, they composed and performed stories in old Norse associated with the kings, nobles and heroes of Iceland and Scandinavia.  The poetry recorded historical deeds they performed or eulogies after their death.  A popular skald held a high status at his sponsor’s table. Some kings and nobles wrote and performed themselves.

The sagas are epic tales in prose about Viking voyages and battles that took place during the voyages and legends of heroes and saints and bishops. Many of the stories relate toIcelandand the settlement ofIceland. The tales are generally true with some embroidery. Many of the sagas were preserved by the people of Iceland.

Snorri in his History of the Norwegian Kings in relates how, early at morn, before the fatal battle of Stiklastad in 1030 AD, King Ólaf the Saint asked his skald to recite a song.  Below are the last two stanzas of Exhortation of the Housecarls which he recited to the army before it went to battle with defeat and death certain:

“Here by my chieftain’s head I shall sink now, by his feet thou shalt find thee a rest.
Booty-seekers on battle field shall bear me out, the great-souled king’s gifts even the dead forget not.”

“Soon greedy eagles will gorge on our bodies, ramping ravens will rend our limbs.
to high-minded, hardy hero it is seeming dying to dwell by his king rich in deeds.”