The first in the series of VERY expensive gifts is a Fabergé egg. The fabulous Fabergé eggs were ordered from the House of Fabergé by the Russian Tsars as special occasion gifts for their wives and mothers. Tsar Alexander III had the first Faberge egg created for his wife to celebrate the 20th anniversary of their betrothal. The nested Hen Egg was made of gold with a white enameled shell that opens to reveal a golden yellow yolk which contained a golden hen with a diamond replica of the Imperial crown with a ruby suspended from it. 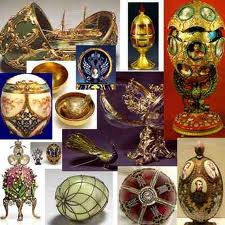 From 1885 until the assassination of the last Tsar in 1917, Peter Fabergé designed the eggs which were a surprise for the emperor and his family. The Tsar’s only requirement was that the egg would contain a surprise. The eggs which became more elaborate over the years were made of precious metals or hard stones decorated with combinations of enamel and gem stones. Faberge made a few large eggs for wealthy private collectors and seven eggs were made for Alexander Kelch, a wealthy industrialist. Of the 65 large Fabergé eggs, 57 survive and of the 50 Imperial eggs only 42 survived.

The Fabergé company was nationalized after the Russian Revolution. The Fabergé family escaped to Switzerland and continued their business. The Fabergé egg has become a symbol of luxury, and the eggs are regarded as masterpieces of the jeweler’s art. If you want to buy one of their low end pendants today (Limited bought the Fabergé trademark), it would set you back about $200. IF one of those large original eggs came up for sale, prepare to pay about $10 MILLION bucks. In 2002 an anonymous buyer from Qatar paid $9,579,500 for the Winter Egg (the rarest and most expensive of the Russian Imperial Easer Eggs), up from $5.6 million in 1994.