I am SO excited. His Obsession is released tomorrow. Didn’t know anything about the pre-order deal but saw an email by another newbie on the Author Loop and my jaw dropped. Sure enough, when I hopped over to the Siren BookStrand site, there was my name, a bio, and the book was available for pre-order. On sale, no less. Below is a short blurb and excerpt, followed by a Buy Link or just click the cover.  RB 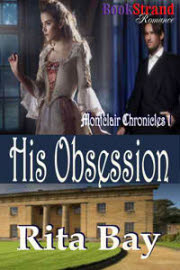 In 1788 when Emeliese Alexander, a student at an elite Parisian finishing school, boarded a yacht bound for England, she never imagined she would be kidnapped and sold into slavery. Devastated by Robert Montclair’s betrayal and doomed to live in a pirate’s harem in the Republic of Bou Regreg, Emmy vows to create a life for herself and her unborn child – whatever the price.

Emmy’s skin crawled. She opened her eyes to find her captor staring at her, his eyes traveling up and down her body, assessing her like the merchants examined the cargoes of her family’s ships when they came into port.

“You are a beautiful girl, all golden. Small for my taste, perhaps, but perfect. Some men find that very desirable. My son does have good taste in his women.”

“You are Robbie’s father?” A silly question. He had just said that, but she was still a bit groggy. She must put her fear aside and gather her wits, then discover his intentions. His men had thought nothing of murdering Jacque. Was he toying with her before she met the same fate or worse?

“I admit my guilt.” He saluted her with his snifter. “Jonathan Montclair, the seventeenth Earl of Ashford, at your service.”

“Robbie is from a noble family?” Robbie had introduced himself as Robert Montclair, he had never mentioned that his family was noble. The English nobility were very particular about who their offspring could and could not marry. She would almost certainly fall into the “could nots,” and Robbie knew why.

The earl cocked a brow. “Baron Montclair. The heir. He did not tell you? I thought you were a fortune hunter looking for a wealthy protector.”

“No, I am a student at Madame Foret’s Academy for Young Ladies. I am not looking for anyone. I will return home to my family next year.” At least, that had been her intention until she had met Robbie. Her future was neither bright nor secure now. The man was evil or insane or both. And he controlled her fate.

This week, Rita Bay’s Blog will feature  historical posts about the pirates of Bou Regreg, the Sallee Raiders, the Barbary slave trade, the demise of Bou Regreg and more.  Rita Bay