The Atlantic slave trade in America began in the 16th century and lasted until the 19th.  The vast majority of slaves involved in the Atlantic trade were Africans from the central and western parts of the continent who were sold by Africans to European slave traders, who transported them across the ocean to the American colonies. Slaves were used on the coffee, tobacco, cocoa, cotton and sugar plantations, in gold and silver mines, in rice fields, the construction industry, timber harvesting, or in houses to work as servants.

The slave traders were, in order of scale: The slave traders were the Portuguese, the British, the French, the Spanish, the Dutch, and Americans.  They established outposts on the African coast where they purchased people from local African tribal leaders. Estimates are that about 12 million were shipped across the Atlantic. The slaves were packed into the ships to transport the maximum number of slaves possible.  (See diagram above) 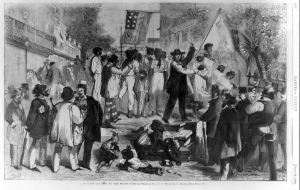 The first leg of the Triangular Trade was from a European port to Africa, in which ships carried supplies for sale and trade, such as copper, cloth, trinkets, beads, guns and ammunition. When the ship arrived, its cargo would be sold or bartered for slaves. On the second leg—the Middle Passage, ships sailed from Africa to America. Once the ship reached its destination, enslaved survivors were auctioned primarily in the Caribbean, less often in the American colonies. The ships were then prepared to get them thoroughly cleaned, drained, and loaded with export goods for a return voyage, the third leg, to their home port, from the West Indies the main export cargoes were sugar, rum, and molasses; from Virginia, tobacco and hemp. The ship then returned to Europe to complete the triangle.  Tomorrow, Laws Governing Slavery.   Rita Bay