The Martyrdom of St. Cyprian 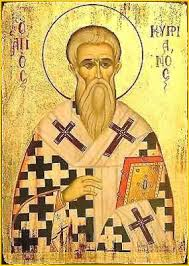 n the martyr went out of the court, a great number of soldiers attended him, and he was guarded by centurions and tribunes marching on each side of him. They led him into the country, into a large plain, thick set with high trees; and many climbed up to the top of them, the better to see him at a distance, by reason of the crowd. St. Cyprian being arrived at the place appointed, took off his mantle, fell upon his knees, and prostrated himself before God. Then he put off his Dalmatic, which he gave to the deacons, and remained in a linen vestment, or shirt, expecting the executioner, to whom he ordered a sum of twenty-five golden denarii, amounting to about six pounds English, to be given. He himself bound the napkin over his eyes; and he desired a priest and a deacon to tie his hands.

The Christians spread before him napkins and handkerchiefs to receive his body. His head was struck off on the 14th of September, 258. For fear of the insults of the heathens, the faithful conveyed his body for the present into an adjoining field, and they interred it in the night with great solemnity on the Mappalian way.

Tagged as Martyrdom of St. Cyprian