The Text of the Rosetta Stone 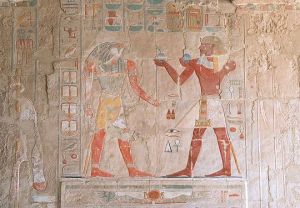 Most people have heard about the Rosetta Stone and how it was used to learn the Egyptian hieroglyphics. What you seldom see is a translation of the stone itself. The stone was most like originally erected in a temple. When the Roman emperors closed all temples that were not Christian, many temples were disassembled and used for construction projects. The translation honoring Ptolemy V follows:

“In the reign of the young one—who has received the royalty from his father—lord of crowns, glorious, who has established Egypt, and is pious towards the gods, superior to his foes, who has restored the civilized life of men, lord of the Thirty Years’ Feasts, even as Hephaistos the Great; a king, like the Sun, the great king of the upper and lower regions; offspring of the Gods Philopatores, one whom Hephaistos has approved, to whom the Sun has given the victory, the living image of Zeus, son of the Sun, Ptolemy living-for ever beloved of Ptah; in the ninth year, when Aëtus, son of Aëtus, was priest of Alexander …;

The chief priests and prophets and those that enter the inner shrine for the robing of the gods, and the feather-bearers and the sacred scribes, and all the other priests … being assembled in the temple in Memphis on this day, declared:

Since king Ptolemy, the everliving, the beloved of Ptah, the God Epiphanes Eucharistos, the son of king Ptolemy and queen Arsinoe, Gods Philopatores, has much benefited both the temples and those that dwell in them, as well as all those that are his subjects, being a god sprung from a god and goddess (like Horus, the son of Isis and Osiris, who avenged his father Osiris), and being benevolently disposed towards the gods, has dedicated to the temples revenues in money and corn, and has undertaken much outlay to bring Egypt into prosperity, and to establish the temples, and has been generous with all his own means, and of the revenues and taxes which he receives from Egypt some has wholly remitted and others has lightened, in order that the people and all the rest might be in prosperity during his reign …;

It seemed good to the priests of all the temples in the land to increase greatly the existing honours of king Ptolemy, the everliving, the beloved of Ptah … And a feast shall be kept for king Ptolemy, the everliving, the beloved of Ptah, the God Epiphanes Eucharistos, yearly in all the temples of the land from the first of Thoth for five days; in which they shall wear garlands, and perform sacrifices, and the other usual honours; and the priests shall be called priests of the God Epiphanes Eucharistos in addition to the names of the other gods whom they serve; and his priesthood shall be entered upon all formal documents and private individuals shall also be allowed to keep the feast and set up the aforementioned shrine, and have it in their houses, performing the customary honours at the feasts, both monthly and yearly, in order that it may be known to all that the men of Egypt magnify and honour the God Epiphanes Eucharistos the king, according to the law.”

Filed under Event of the Week