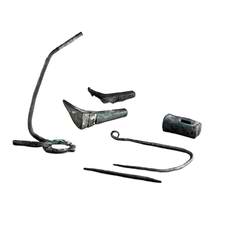 Selection of blacksmith’s tools  Iron Age/Roman, 100 BC-AD 100 From the River Lea at Waltham Abbey, Essex, England  Tools used to make iron objects in Iron Age and Roman Britain. Any blacksmith’s forge of this time would have these objects – anvil, tongs, sledge hammer, chisel and poker. Tools had been bent or broken before they were placed in the River Lea at Waltham Abbey   © Trustees of the British Museum

Tagged as Blacksmith's tools, Treasure of the British Museum