Shelter/Housing is an element of civilization. Early hunter-gatherers who moved seasonally or followed herds relied on caves or rock shelters for their housing needs. Primitive tents of hide or wood fabric or wood shelters were also used by the nomadic hunter-gatherers. (See Petra Cave pic)

Later, when people settled in more permanent house to farm and/or herd, their structures became more permanent. Depending on the materials available in the area, buildings could be constructed of wood, mud, stone or brick.  (See Egyptian mud house pic) When houses were used for protection, towers were developed, though some cultures relied homes on stilts over bodies of water or on islands that were connected to land by a causeway.  The people of Skara Brae, a 5,000-year-old community discovered in the Orkneys, lived in stone houses with stone furniture and plumbing. 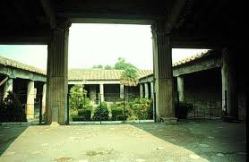 Increases in size and decoration of building, often a symbol of status, became more prominent as civilizations evolved.  The creation of the arch by the Mesopotamian civilization over 4,000 years ago allowed the Babylonian, Egyptian, Minoan, Greek, and Roman civilizations to create sprawling monuments and homes.   (See pic of restored Roman villa in Pompeii) Tomorrow, Weapons and Wars.  Rita Bay