The Indians among whom Captain Clark and Captain Lewis traveled had many strange ways of doing things. They had nothing like our matches for making fire. One tribe of Indians had this way of lighting a fire. An Indian would lay down a dry stick. He would rub this stick with the end of another stick. After a while this rubbing would make something like sawdust on the stick that was lying down. The Indian would keep on rubbing till the wood grew hot. Then the fine wood dust would smoke. Then it would burn. The Indian would put a little kindling wood on it. Soon he would have a large fire.

In that time the white people had not yet found out how to make matches. They lighted a fire by striking a piece of flint against a piece of steel. This would make a spark of fire. By letting this spark fall on something that would burn easily, they started a fire.

White men had another way of lighting a fire when the sun was shining. They used what was called a burning glass. This was a round piece of glass. It was thick in the middle, and thin at the edge. When you held up a burning glass in the sun, it drew the sun’s heat so as to make a little hot spot. If you put paper under this spot of hot sun­shine, it would burn. Men could light the tobacco in their pipes with one of these glasses.

Captain Clark had something funny happen to him on account of his burning glass. He had walked ahead of the rest of his party. He sat down on a rock. There were some Indians on the other side of the river. They did not see the captain. Captain Clark saw a large bird called a crane flying over his head. He raised his gun and shot it. The Indians on the other side of the river had never seen a white man in their lives. They had never heard a gun. They used bows and arrows.

They heard the sound of Clark’s gun. They looked up and saw the large bird falling from the sky. It fell close to where Captain Clark sat. Just as it fell they caught sight of Captain Clark sitting on the rocks. They thought they had seen him fall out of the sky. They thought that the sound of his gun was a sound like thunder that was made when he came down. The Indians all ran away as fast as they could. They went into their wigwams and closed them.

Captain Clark wished to be friendly with them. So he got a canoe and paddled to the other side of the river. He came to the Indian houses. He found the flaps which they use for doors shut. He opened one of them and went in. The Indians were sitting down, and they were all crying and trembling. 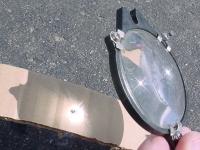 Among the Indians the sign of peace is to smoke together. Captain Clark held out his pipe to them. That was to say, “I am your friend.” He shook hands with them and gave some of them presents. Then they were not so much afraid.

He wished to light his pipe for them to smoke. So he took out his burning glass. He held it in the sun. He held his pipe under it. The sunshine was drawn together into a bright little spot on the tobacco. Soon the pipe began to smoke. Then he held out his pipe for the Indians to smoke with him. That is their way of making friends. But none of the Indians would touch the pipe. They thought that he had brought fire down from heaven to light his pipe. They were now sure that he fell down from the sky. They were more afraid of him than ever.

At last Captain Clark’s Indian man came. He told the other Indians that the white man did not come out of the sky. Then they smoked the pipe, and were not afraid.