Tales of treasure hoards in England abound and many have been discovered across the country. But none like that of Terry Herbert, the subject of National Geographic’s Lost Gold of the Dark Ages, who in July, 2009 discovered England’s largest trophy hoard ever. The 11 pounds of gold, 3 pounds of silver, and numerous jewels in the Staffordshire Hoard is valued at £3.3 million. 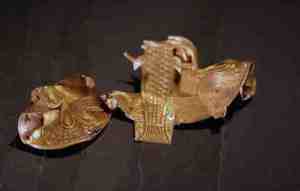 The hoard was located on the old Roman road of Watling Street(now A-5) in Staffordshire in the English Midlands. All of the 1500 artifacts are associated with males—related to warfare (ornamentation from swords, helmets and shields) or religion (crosses).

The 7th century hoard, the only one of Anglo-Saxon origin, appears to be a collection of trophies but whether they were from one battle or many and who buried it or why is unknown. A clue, however, might be found in the Saxon poem Beowulf: ‘One warrior stripped the other, looted Ongentheow’s iron mail-coat, his hard sword-hilt, his helmet too, and carried graith (his stuff) to King Hygelac; he (Hygelac) accepted the prize, promised fairly that reward would come, and kept his word. They let the ground keep that ancestral treasure, gold under gravel, gone to earth, as useless to men now as it ever was.’

The excerpt from Beowulf reveals the practice of Anglo-Saxon offerings of treasure as a sacrifice.  The Celts made similar offerings which have often been associated with water.      Tomorrow, The Norse. Rita Bay