Two aspects of the Greco-Roman pantheon were prophecy and healing.  The healing cult of Asclepius which goes back to the 6th century BC centered on sanctuaries (a kind of health resort) called asklepia that were located all over the ancient world of the Greeks.  Magic and medicine united at these healing centers where patients/worshippers made healing pilgrimages to the centers. The asklepia also served as temples of worship for the god Asclepius and centers of education for physicians.

Epidaurus was the oldest and most famous of the asklepia, some of which had hospitals attached to the temples. Patients were placed in healing trances where they received dreams or notes from the gods telling them their treatment. The priests carried out the treatments which might involve surgery or use of the therapeutic baths. When patients were healed, they were expected to make votive offerings in appreciation for their cures.  The offerings often took the shape of the body part that needed healing. 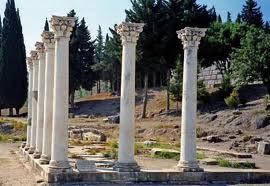 The Temple of Epidaurus 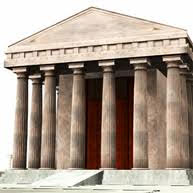 The Oracle at Delphi, located on Mount Parnassus, was the most important oracle in Greece and a center of worship for the god Apollo. In mythology, Delphi was the site where Apollo killed the Python.Delphiwas regarded as the center of the world.  It was also the site of panhellenic games (the Pythian Games) and a famous music competition, as well as the location of an eternal flame. 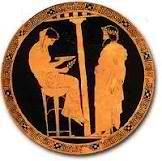 The oracle was located at the Sanctuary of Apollo. Apollo spoke through his oracle: the sibyl or priestess of the oracle at Delphi was known as the Pythia.  The Pythia would make her ambivalent prophecies while sitting over a fissure from which sacred fumes arose. Cities and individuals consulted the Delphic oracle during the warm months of the year on everything from important matters of public policy to personal affairs.

The Romans when they held sway over Greece initially protected the shrine.  The temple was burned during the first century BC by a barbarian invasion.  Later Roman emperors looted the shrine of its votive offerings and statuary. Nero alone took 500 statues. Despite the advent of Christianity, the Oracle continued until temple was closed by emperor Theodosius in 395 AD and the area was abandoned.