New Wonder of the World Runner-Up: The Moai

The Moai of Easter Island in Polynesia are New Wonders of the World Runners-Up and a World Heritage Site.  These monolithic human figures of carved rock (tuff and basalt) were carved in the 13th – 16th centuries. The tallest is 10 meters high and weighs 82 tons.  The Moai are faces of ancestors. The proud-faced statues still gazed inland when Europeans first visited the island, but most were cast down during later conflicts between clans. 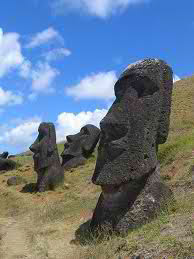 The quarries in Rano Raraku appear to have been abandoned abruptly, with a litter of stone tools, many completed moai outside the quarry awaiting transport and almost as many incomplete statues still in situ as were installed on ahu.