Calgacus: Caledonians Against the Romans 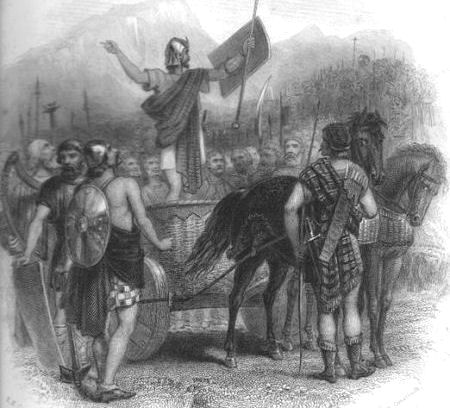 The Roman writers are often the only source of information about “barbarians.”  While the Celts and  Picts did not put their history or beliefs  into  writing, the Romans recorded their own observations, what they’d heard from others and personal views about their enemies.  Since the readership of the Roman writers was other Romans, they expected to read about the superiority of the Roman culture and the evil deeds and/or intentions of the enemies who needed to be conquered to insure the safety of Rome and its possessions.

Tacitus was a first century AD historian who wrote extensively about the Romans in Britain who happened to be under the leadership of his father-in-law, Gnaeus Julius Agricola.  Agricola was appointed governor of Britannia about 78 AD.  He immediately focused his attention on subduing the tribes in Wales and northern Britain.  Titus, Vespasian’s successor, ordered Agricola to conquer the rest of Britain.  His two legions attacked the tribes of what is now southern Scotland and prepared to advance north.  A revolt to the south forced him to quell that rebellion before proceeding north.  When Domitian succeeded his brother Titus, Agricola was ordered to push the attack.

In 83 AD after Agricola’s ships invaded Scotland, Calgacus and his army gathered at Mons Graupius (location unknown) Tacitus recorded both generals’ speeches but the following words of Calgacus’ are the most famous:  “They create desolation and call it peace. Let us then, unconquered as we are, ready to fight for freedom, prove what heroes Caledonian as been holding in reserve!”  Tacitus reports that Calgacus’ army was decimated by the superior strategy and training of Agricola’s army—10,000 dead Picts compared to 360 Roman soldiers.  Agricola withdrew south, leaving the northern tribes to conduct guerilla warfare against the Romans.  The mighty Roman army never advanced so far into Scotland again.  An excerpt of Calgacus’ speech follows:

“To us who dwell on the uttermost confines of the earth and of freedom, this remote sanctuary of Britain’s glory has up to this time been a defence. Now, however, the furthest limits of Britain are thrown open, and the unknown always passes for the marvellous. But there are no tribes beyond us, nothing indeed but waves and rocks, and the yet more terrible Romans, from whose oppression escape is vainly sought by obedience and submission. Robbers of the world, having by their universal plunder exhausted the land, they rifle the deep. If the enemy be rich, they are rapacious; if he be poor, they lust for dominion; neither the east nor the west has been able to satisfy them. Alone among men they covet with equal eagerness poverty and riches. To robbery, slaughter, plunder, they give the lying name of empire; they make a solitude (also translated as “create desolation” RB) and call it peace.”

To read the entire speech: http://www.thelatinlibrary.com/imperialism/readings/agricola.html