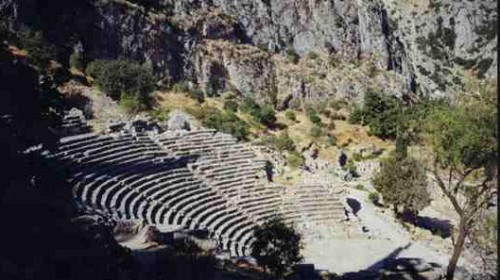 The Theater at Delphi

In ancient times, the Greeks enjoyed plays – comedies and tragedies – in huge open air theaters which could seat up to 20,000 people. The theater at Delphi could seat 5,000. The theaters were constructed to allow the actors to be heard throughout the area. The actors also wore masks that were designed to magnify their voices. The Romans adopted much of the Greek culture, including a love of theater.

Deus ex machina is a Latin term meaning “God from the Machine.” In Greek tragedies, a God appearing abruptly and unexpectedly and resolves the conflict in the story by introducing new information or a character. Usually a crane which could or a trap door was used for entry onto the stage.
Ideally, when a play or novel is written, the story should be resolved internally from the action developing within the story. The deus ex machina is not considered to be a legitimate method to resolve a plot.
Now, the phrase deus ex machina can refer to a person or event that provides a sudden and unexpected solution to a difficulty.
Tomorrow: A Pyrrhic Victory       Rita Bay

One response to “Deus ex machina”