On July 4, 1776, Benjamin Franklin, John Adams, and Thomas Jefferson were placed on a committee by the delegates of the Constitutional Convention to develop a national emblem and coat of arms for the fledgling nation—without success.  Their work and that of two additional committees were given to Charles Thomson, Secretary of Congress. Thomson selected the best features of the committees, giving special prominence to the American bald eagle. Five days later, the Great Seal was finalized and approved on June 20, 1782. 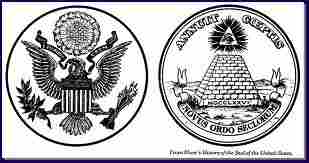 The Symbols on the Great Seal include:  the Eagle which holds a scroll in its beak inscribed with the Latin motto E pluribus Unum (one nation created from 13 colonies). The eagle grasps an olive branch in its left talons and a bundle of thirteen arrows in its right. The olive branch and arrows are symbols for the power of peace and war.  The eagle’s face is turned towards the olive branch symbolizing peace.

A shield with thirteen red and white stripes covers the eagle’s breast. The shield is supported solely by the American eagle as a symbol that Americans rely on their own virtue. The red and white stripes of the shield represent the states united under and supporting the blue, which represents the President and Congress. The color white is a symbol of purity and innocence; red represents hardiness and valor; and blue signifies vigilance, perseverance, and justice.

Above the eagle’s head is a cloud surrounding a blue field containing thirteen stars which form a constellation. The constellation denotes that a new State is taking its place among other nations.

The seal appears on coins, postage stamps, stationery, publications, flags, military uniforms, public monuments, public buildings, passports, and other items associated with the U.S. government. The Seal can be affixed only by an officer of the Department of State, under the authority of its custodian, the Secretary of State.  The dollar bill displays both the obverse (front) of the seal and the reverse which contains the pyramid and eye.

Tagged as American Eagle, Charles Thomson, E Pluribus Unum, Great Seal, Out of One Many